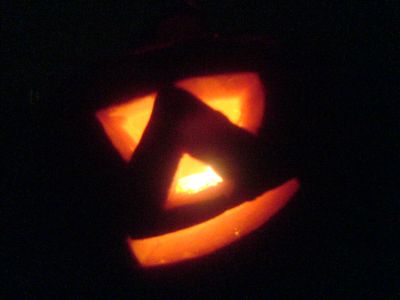 Halloween moved to America in the nineteenth century with Scottish and
Irish emigrants, only to return to Europe towards the end of twentieth
century. Its growing economic importance as a source of merchandising
and even of tourism-related activities is increasingly in evidence. In
Scotland and Ireland, turnips were used for Jack-O-Lanterns, but when
the tradition was taken over to America pumpkins were used because they
were easier to hollow out than the neep!!!! And that is the origin of
the pumpkin lantern. It is interesting to note that vintage American
Halloweeen cards actually depict Scottish symbols such as the thistle
and tartan, and Scottish poetry. Have a safe and happy Halloween!

Send me your sounds